Truly excellent Yamakobushi (mountain magnolia) or Magnolia kobus, does not flower reliably as a bonsai in part due to maintenance pruning. Young trees from seed take a long time to reach flowering age. The wild species’ flower is simple and white; understated and perfect for bonsai.  Older trees develop smooth gray bark while the young shoots are a mottled brown color.  A tree with excellent form is great to appreciate in winter, so trees of this species are styled for appreciation of form with Fall color (yellow), Spring flowers, and the alien-looking fruit as side benefits.  As with a number of other flowering / fruiting bonsai, there is an understanding by those in the know that sometimes branches are a little long for a given style or structure a bit erratic for the sake of flower production.  Plants that flower only on old wood would be a good example.  Compromises must be made as not every species flowers directly off the trunk like Theobroma cacao (chocolate tree) or some species of Cercis (redbud).  This bonsai has flowered sporadically over the years, but a full-blown flower show is possible for the Kokufu-ten by letting shoots run a little long and forcing an early bloom time.  I’ve forced a bunch of different plants to bloom on a deadline before and it is not fun.This particular tree was featured in  Bonsai Art of Japan Episode 16 and has been at Kouka-en for over 3 years.  Each Spring, I’ve been responsible for removal of susoba (leaves without a dormant bud underneath) and other maintenance tasks like regular bark cleaning with a toothbrush to decrease incidence of scale (an insect) and to keep the bark looking sexy.  Watching for caterpillars is an important task as what we know as “tent caterpillars” can defoliate a bonsai of this species in a day.  The first two years of training focused on maximizing the vigor of the tree to gain trunk girth.  Last year, the tree was cut back hard (as shown in the video above).  This year, the tree was re-potted and new growth was checked by the cutting back of roots and removal of susoba early in the growing season as is normal for most deciduous trees.  Comparison of the video above and the photos below show the discrepancy in leaf size and shoot length.  Deciduous magnolia have extremely vigorous root growth and will push adventitious roots anywhere that stays wet.  Watch for heavy moss build-up where you do not want new roots.  This yamakobushi was literally lifting itself out of the pot before repotting.

Now that we had slowed the tree down, it was time to set the branch structure in place after allowing the bonsai to grow largely unrestricted for a while.  This branch is getting too thick, so my main goal for this project is breaking up this branch’s visual weight even when viewed leaf-less.  Other primary branches also have too much leg showing and a little mystery needs to be created. Styling this magnolia was downright fun and a welcome break from “fixing” issues and all the other maintenance tasks I’d been doing non-stop on pines, shimpaku, and needle junipers lately.  I do feel lucky to study at Kouka-en as there are multiple representations of a just about any given species but nothing like 100 wisteria or 300 trident maples to deal with.

The process was cathartic as the tree had few structural issues and internodes on this tree are not close together.  Photo at right highlights the front right branch I wired a little more downward than normal to address the issue.  This species is similar to trees such as Prunus jamasakura (flowering cherry)  in that branches seem really supple aka “bendy”, but there is no warning crack when making bends like with conifers; just a broken branch and an angry sensei shortly thereafter.

Orientation of shoots becomes more uniform with the aid of wire.  The goal being quite similar to pine shoot wiring but with far less branches. Overall, branch tiers have a more unified feel now as errant shoots and negative space areas can be controlled.  Not monumental change, but a hell of a lot better than the initial shape of the tree in the video footage above from last year.  I brightened the bark in the photo below to show some of the points on the tree I worked to break up or soften.  Any long, uninteresting sections of main branches (especially on the left side) were broken up with smaller shoots.  The leaves obviously help now, but when Fall comes, these fine branches will be even more important. The lower right side is harder to appreciate in 2D but looks better in person.  Overlapping branches were wired apart to maximize the photosynthetic potential of each branch’s leaves.  In the next few years, new shoots will pop all over the tree and the tiers will have a more rounded silhouettes full of fine branching (for a magnolia that is).

Endo-san (66), a client of Kouka-en for at least 30 years, had been interested in this magnolia since it arrived.  Endo-san’s collection is full of excellent bonsai of many species. Most notable to me are his deciduous and broadleaf evergreens; some of which are the best of that style for the species.  We maintain his full cascade Trachelospurmum asiaticum ‘Nana’, a semi-cascade Prunus mume ‘Hibai’, and a few of his trees cycle in and out of our care frequently.  This magnolia is now “finished” with the main work Fujikawa-san envisioned accomplishing.  Endo-san called “dibs” on the tree shortly after styling last month and we delivered it last week.  This yamakobushi will be of Kokufu quality in the coming years. The trip to deliver the magnolia along with a massive formal upright Pinus parviflora and shimpaku Bjorn styled was a special one.  Endo-san’s collection had lived on the 4th story roof of his building for about 20 years.  We were going to be some of the first bonsai afficionados to see the new ground level bonsai garden he built himself.  After purchasing the adjoining property and having the house demolishing earlier this year, Endo-san finally had his dream garden to spread out his trees and save his knees……

Endo-san has exhibited in the last 11 Kokufu-ten and every Taikan-ten.  The view from his home on the shore of Lake Biwa (along with the bonsai of course) made me supremely envious.While there, we picked up a shimpaku that Fujikawa-san styled 16 years ago for a Kinbon article that Bjorn Bjorholm will now style this year for another Kinbon piece.  I was asked to wire this Juniperus rigida.  Here are a few of his bonsai that I was most taken by: 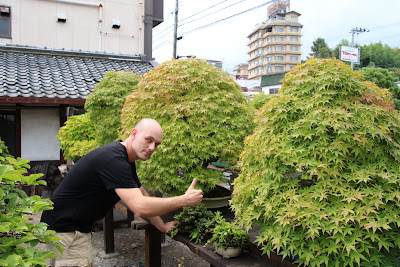 Dario Mader, a current student of the Fujikawa International Bonsai School from Switzerland.  His month of study is coming to an end.  But, as with anyone who stays a while in Japan, Dario’s eyes are now opened a lot wider to what bonsai is and can be. More photos of this garden will be should be popping up in the German bonsai forums.

This was one of many business trips I’ve had the good fortune to go on.  The “busy” season for bonsai professionals in Japan looms.  I’ve yet to slow down any time of the year here.  But, at least it will not be 110% humidity and 95 degrees here soon.  Having grown up in Macon, Georgia and other parts of the South, Osaka seemed like no sweat (excuse the pun).  Man was I wrong.

Thanks for reading.  Upcoming posts will cover some Juniperus rigida stylings and a day trip to Koya-san.